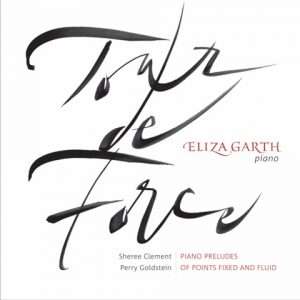 now available on Amazon.   For more info, visit Eliza Garth and see this review on textura.org.

Solo piano. 45′
Over time I have periodically ‘checked in’ with my first instrument — the piano — and written short, self-contained works that spoke to the ether: poems and short stories written ‘for the practice room walls’, for some future, unknown audience. These thirteen pieces, between one and eight minutes long, speak with a personal, often private and poetic voice, querying, asserting and exploring. They range from epigrams to torrid essays.

They were premiered in small groups over the same timespan at various concerts, largely in New York City; Eliza Garth gave the first performance of the whole, huge set in St. Mary’s City, Maryland, and then and Baltimore, MD and New Orleans, LA.
For works composed intermittently over a period of time these Preludes are fairly sequential and connected, with figures, themes and textures reappearing and developing over the course of the series, perhaps because with each work I was revisiting the same creative well. The connections make them work well performed in groups of three or four, although when played in the given sequence, the thirteen pieces make an attractive tour-de-force: they form a forty-five minute arch, with an extreme range, from powerful and thundering to gossamer and twinkling.
Eliza Garth recorded them at Dreamflower Studio.  They are available on her solo CD, Tour de Force, on Albany Records  and from Amazon.

Prelude No. 1: Meditatively.   2′    The music hovers between two dominant 7th chords, phrased as if posing a question, from different angles. It introduces a ‘chorale’.

Prelude No 2: Moderato.  2′ 30″  Opens with a rolled chord, posing another question. The chord expands into an upward stepwise figure and then connects to tunes, followed by explosive figures. It makes small asides, in the form of chorale phrases and ends climactically with a fast series of loud, staccato chords.

Prelude No. 3: Gently, Steadily.  4′ 40″  Returns to the gentle, querying tone of Prelude No. 1 with a sweet, rocking figure on the F/B-flat in the middle of the keyboard. Fourths take a big role in this piece, which quickly veers away from ‘gentle’ to explosive textures, and alternates between the two extremes. Very quiet, staccacto chords that are reminiscent of chorales in Prelude No. 2 intervene a few times. The piece ends with a quick gesture in the lower register, ending with a 4th, descending from D-flat to A-flat.

Prelude No. 4: Moderato. 6′  Includes a pseudo-hymn. Long, and at times complex, it opens with dyads and continues probing and questioning.

Prelude No. 5: Lento. 3′  A slower piece that describes big open spaces with strings of lush chords. It has a few connections to No. 3.

Prelude No. 6: Allegro.  1′  A quick soliloquy, full of nervous tapping.

Prelude No. 8: Dramatically.   3′  Another big arch, with a tad more force applied.

Prelude No. 9: Adagio. 6′ 30″  Initially simple, delicate, and mercurial, the music expands into the furious, indignant, and complex culmination of the set of thirteen preludes.

Prelude No. 10: Moderato.  2′ 35″  After this prelude opens with a bold and cheery 12-tone march, the music slows down and speeds up at the same time, and expands outward in almost all dimensions.

Prelude No. 12: Quickly.  1′ 30″  An official exploration of more twittering, finding ways to migrate from twittering to stuttering arpeggios.

Prelude No. 13: Moderato.  4′ 30″  Slippery tunes, punctuated by pauses, migrate up in tessitura, and are squeezed into precise and slightly harsh and hesitant phrases.